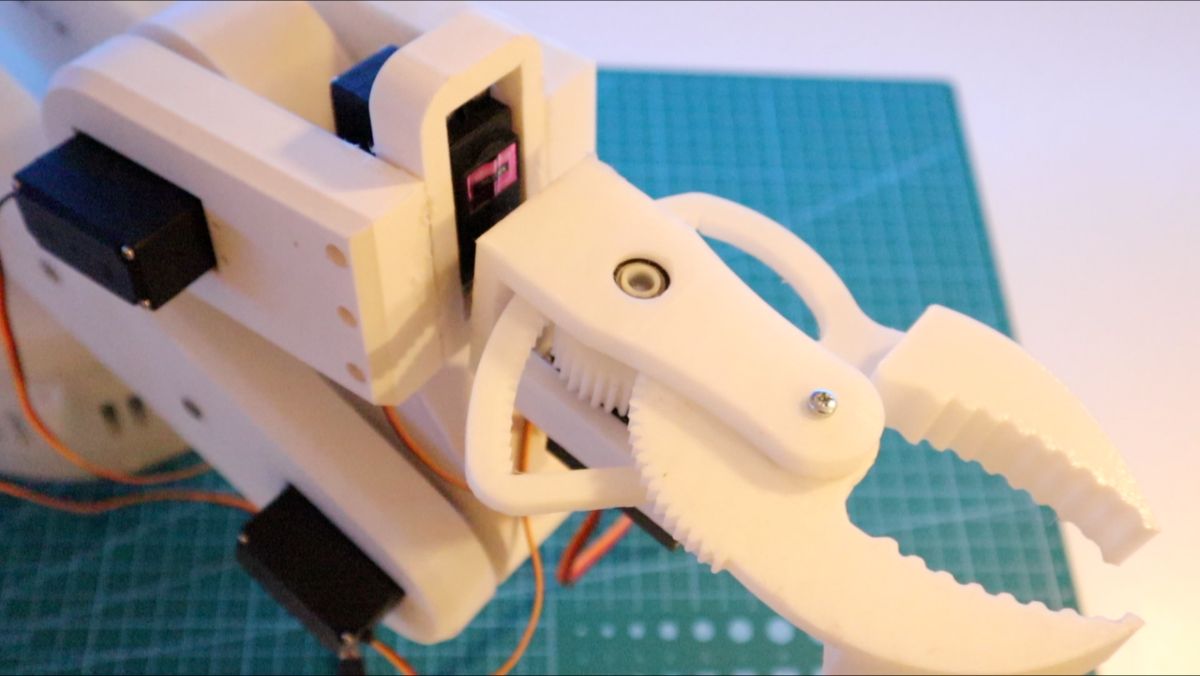 Blockbuster Films like Pacific Rim, Avatar, and other Sci-Fi Movies have hinted at the ability to synergize with Robots – where your movements can be enhanced with Robotic assistance.

What if we could build the same industrial Robot, but on a smaller scale?

This project is an attempt at achieving this.

This is an Arduino Robot Arm that can be programmed or even controlled by Hand Gestures.

In this tutorial, we’ll build a six-axis Robot controlled by Hand gestures using a Robotic Glove. And by mimicking natural human gestures such as a pinch, or a wrist rotation to the left, You’ll be able to open/close or rotate the robotic arm left and right respectively. In effect, manually controlling a Robotic Arm.

The Robotic Arm is fully customizable. You can either buy your own or 3d print your own. If you choose to 3D print, no worries. There is a list of different Robots that use servo motors, so the theory of what we’re building still applies.

For this project, this prototype (Mark 1)  would be 3D printed as it gives me more space to create custom parts.

You can find more information on this build, along with the screw types from the parts above. The time taken to print can up to 40 hours. However, this cuts the cost of buying a Robotic Arm.

The Robotic Glove was an aesthetic addition to the project, but you can just as well use a builders glove to implement the Robotic Arm.

Below are all the parts that are required to build the electronics:

Overall, we’re sending a signal (over Bluetooth) from the Robotic Glove to the servo motor. When a value has been received, the servo driver will send a signal to a specific servo motor moving the Robotic Arm.

Now, if we add multiple servos and more sensors, we can control each Motor. `

If we think of a Robotic Arm as a series of servo motors coordinating with each other to perform a function, we can create a robotic arm controlled by a Robotic glove.

The Robotic Glove’s Arduino uses sensors to communicate with the Robotic Arm Arduino and sends data to move a Servo to the desired angle.

You may be wondering, what sensors does the Robotic Glove use?

For MARK 1, we would be using Flex Sensors and an accelerometer (MPU6050)

We are using these sensors to detect a change in a gesture. We can then send a specific value mapped of a gesture to the Robotic Arm to control a servo motor via Bluetooth. And With enough gestures, the robotic arm comes to life!

The following represents a mapping table of the values sent to the Robotic Arm by the Glove. Each is having keys to characterize its function. (P – Pinkie, L – Right, etc.)

Note: Capital “F” (finger) represents the opposite direction of the servo motor spin 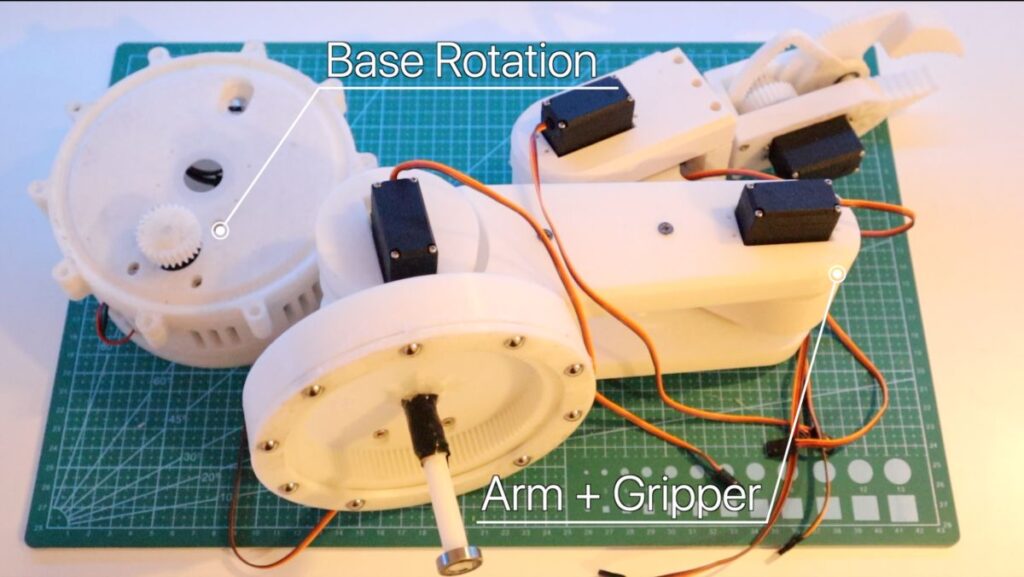 This helps in the long run, as there are many examples of a 3D printed robotic arm that can be customized, e.g., adding an LED, creating a camera stand Clamp:

As previously mentioned, the Robotic Arm was modeled around the Robotic Arm on Thingyverse. I’ve chosen this example as it was an excellent design providing six-axis, well documented, and had strength/ robustness. You can access Wonder Tiger’s Robotic Arm from the Part’s list.

You can also find my remixes for a Robotic Arm Camera Stand. We’ll cover this more in a future release. However, the parts could take a collect at least 40 hours to print all parts.

You can find many other Robotic Arm 3D Printed alternatives too.

Introducing the servo motor and Driver

Given that the Robotic Arm is ideally a series of motors in coordinating together, we can theoretically attach several motors that can be all powered by the Arduino. In this project, we’ll be using the PCA9685 Servo Driver to power the MG966R Servo.

HCPCA9685 Library: Add this Library to your Arduino IDE.

Note: Use an external power supply when powering each Motor. The Arduino cannot supply enough power to control all motors. In this project, a 5V, a 2200 mAh RC Battery was used.

The Arduino diagram wiring should look as below:

NEMA-17 for base rotation

A Stepper Motor (NEMA-17) can be used due to its precision and high torque, helping the Robotic Arm rotate seamlessly to gesture controls.

The NEMA-17 and the A4988 Driver si used to control the direction of the Motor, you can see from the diagram below:

And finally, the following diagram shows the final wiring diagram assembly of the complete Robotic Arm.

The below wiring diagram shows the final assembly of all electronic parts to create a Robotic arm, including the Bluetooth module. We’ll cover the paring process below.

In keeping true to the Robotic Arm’s aesthetics, you can print a 3D Printed Exoskeleton Gauntlet to use as your Robotic Glove.

However, you can use a standard Builder’s Glove for prototyping the Robotic Glove. This ‘Robot Glove Exoskeleton’ design just blended well with the design of the Robotic Arm.

The Robotic Glove consists of the following components:

The following diagram is great to test the flex sensor and the Accelerometer.

Important: The Robotic Arm will only be as accurate as the robotic Glove controls, So it’s worth getting this right.

Configuring the Bluetooth (Master and Receiver)

The Arduino Robotic Arm communicates over Bluetooth using the HC-05 modules. Below highlight the critical information.

Note: All other test codes and the latest version can be found on the Arduino Robotic Arm Git Repo

The Robotic Arm code makes use of the HCPCA9685 Library (for the Servo Driver). This way, we can power multiple servo motors, all controlled by an Arduino. In the code, we can start by adding this library and declaring the servo variables.

The following variables are used to find the previous/increment and get the Servo’s current position.

In the loop() section, we’re constantly checking whether any data is coming from the robotic glove. If true, we’ll store the incoming data in the ‘state’ variable. And depending on the character given, we’ll use this to move the motor(s).

The following section outlines the code:

The Robotic Arm code can be seen as a series of servo motors working together to simulate human movements. The code is the same, with Servo’s being driven by a Servo Driver based on Bluetooth’s values.

Based on the current ‘state’s value,’ the servo Driver would send a signal to the respective Motor.

For example, if we bend our fingers. The value ‘f’ would be sent by the robotic glove (via Bluetooth) whereby the Robotic Arm would read this data and trigger a function to rotate the respective servo motor. This process is repeated in an infinite loop.

Note: The code implements a hard stop, to stop the Motor from exceeding its maximum angle, which can strip the motor gears.

Where servo_joint_3_max_pos is the maximum position of the Motor.

Note: The code implements a hard stop to stop the Motor from exceeding its maximum angle, which can strip the motor gears.

The Robotic Arm code can be found on GitHub. If you work on the project, contribute your own version to Git Repo. This would help build an index of different versions and functionalities of the Robotic Arm.

The code has already been documented (Also available on Git). However, we’ll cover the key points:

The Following code outlines the Arduino reading the values of the sensors:

Read the current position of the Accelerometer:

The Following code calibrates to find the upper and lower limit of the Flex Sensor. To re-calibrate the flex glove, press the reset button on the Arduino.

We’ll constantly check if the current value has exceeded the defined flex’s upper or lower limit based on the calibration. If the flex sensor goes above or below this value, data is sent to the Robotic Arm to move a specific servo motor in a specific direction.

The Robotic Arm is accurate enough to move objects. However, it will require some work to move complex objects, or even compete with the ‘million-plus year’ human beings have on dexterity … although spending more time working on the code, the Robot’s precision can be is works as intended for MARK 1i. Although the Arm can be improved can be improved significantly.

If you would like to improve the code, contribute to the Arduino Robot Arm Git Repo and build your arm. Let’s make this open for others to build on!

Lastly, We’re also able to control the Robot through hand gestures and program the Robot to automate basic tasks.

And that’s all for MARK 1 folks!

If you would like to support this project, consider supporting my Patreon page.