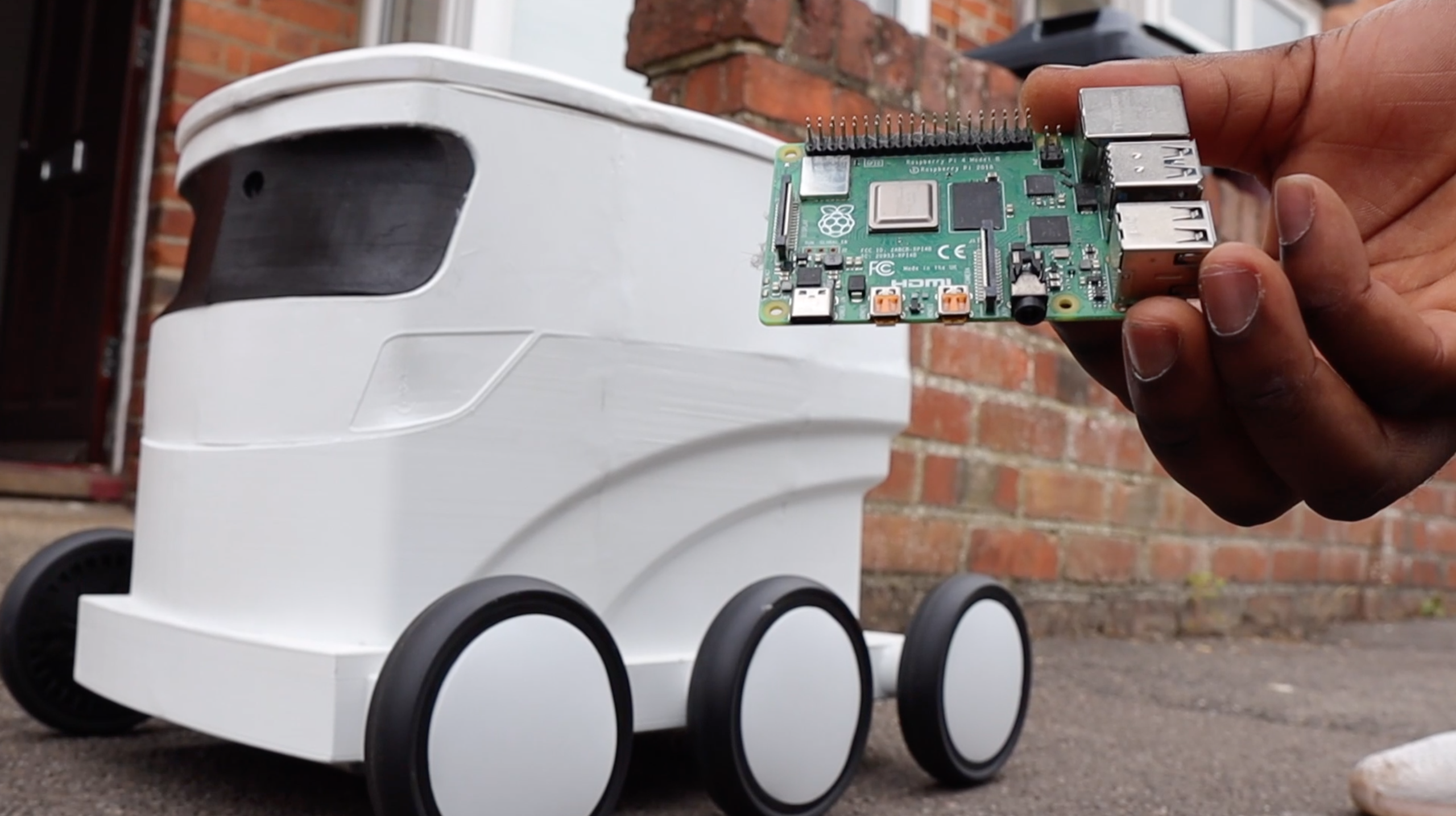 The past ten years have seen rapid tech adoption in the delivery market. From same-day package deliveries to a rise in the food delivery economy.
As e-commerce giants race to keep up with growing demand, the idea of Autonomous Drones delivering small packages to your Doorstep isn’t too far off reality.

Companies such as Amazon and Starship Technologies are pioneering solutions in such spaces. With the likes of Amazon Scout Robot.

Imagine if we could build an Autonomous Robot that can also be controlled remotely from anywhere in the World, using a Raspberry Pi and Arduino. Well, this project is an attempt at building such a solution. Introducing Droiid.

Droiid is a six-wheeled Ground Delivery Robot designed to deliver your packages to your Doorstep. The Delivery Robot can be programmed to be an autonomous Self-Driving Robot, or you can control it from a Twitch/YouTube Livestream.

This article aims to build a Robot (from scratch) that you can control via Livestream chat with Text to Speech Capabilities. I.e., you can control Droiid whether it’s indoors, outdoors, or you’re on the other side of the World.

How it Works – How to control Droiid?

The Raspberry Pi acting as the Orchestrator communicates with all components of the Robot to perform specific functions:

In addition, the advantage of a Raspberry Pi allows us to attach a webcam, speaker, and Mic module, which we can use to stream the Robot’s vision to view on live stream interface such as Youtube Live/Twitch.

As a result, allowing us to view a Robot’s current position and navigate its surroundings with Audio feedback. That means you or I can control the Robot from any part of the World, using any device connected to the internet.

How the commands works:

The droiid server picks this command and executes an action based on predefined rules.

Additionally, to move the Robot, start your live chat message with “movement?”.

Note: Further functionalities can be provided, e.g., Turn lights on “lights? on” or using WASD Commands.

To understand how Droiid is built, let’s break down how a typical Robot works.

The main components you’ll find in a Smaller Wheeled Robot:

A typical Wheeled Robot Car consists of a stable basis chassis. With 4 Motors mounted onto the Chassis.
The Motors are regulated and powered by a Motor Driver drawing voltage from Battery.
Whereby, the Arduino works as the Brain and controls the logic. As a result, controlling the Motor’s direction (Turning Clockwise or Anti-Clockwise) and the PWM signal supplied to the Motor (controlling the Motor Duty Cycle) for Speed.

The below Diagram provides a smaller replica of Droiid that can be programmed to perform the same tasks.

The concept of Droiid takes these fundamentals and applies them to a larger scaled Robot. As a result, all components would be required to be scaled up. I.e., instead of 4 Wheels, Droiid requires 6 Wheels. (3 on each side).
This in turn leads to additional Motor drivers, leading to a Larger battery. And since we got more power, we could take advantage of this by building a larger robot that can carry a larger Delivery payload.

The Following Block Diagram illustrates the components associated with Droiid.

The Assembly of the Delivery Robot (Droiid) can be broken down into three main sections:

Adding Sensors- Increase the awareness of the Robot, the following sensors were added:

Wiring:
The circuit diagram above represents the schematics of the Robot. The schematic created in Eagle would allow us to build our own PCB board. This would help reduce the number of wires as well as providing us a cleaner look.

As well as being used for Camera Streaming via OBS, we’re using the Raspberry as a webserver node which would handle requests from our droiid server over HTTP secure tunneling.

A user writes a command in the chat of the live stream, e.g., “say? left”

But what is the communication between the Raspberry Pi and Arduino?

The Arduino has established a connection with the Arduino and is always listening on Baud Rate (9600).

When a user types “move? Left” the Raspberry Pi sends the command “Left” to the Arduino.

The Right Motor would move at a PWM of 60%, making the whole Robot move left for a specific period.

We can add a delay to keep the Motor on for a specific period of time. And this can be a way of increasing the sensitivity of how far the Robot should move based on every command a user writes.

If you want to fetch live stream data from either Twitch or YouTube, I’ve put together two Python applications (both less than 50 lines of code).
This can be used for many different use cases e.g., make the text-to-speech the output of the Livestream or read a super-chat:

Early testing of the Delivery Robot focused on Speed. The Robot was able to travel at a walking distance (at Motor 35% Duty Cycle) and a good jogging pace (at 85% PWM Duty Cycle).

However, for this version, In order to maintain good control of the robot. Droiid speed would be heavily capped to a speed that is slightly slower than walking speed.

This is v1.0 of Droiid, and as a result, there are some limitations that can be improved:

These questions would be aimed to be solved for Droiid. Version 2.0

This wraps up all the updates for the 6 Wheeled Delivery Robot (Droiid V1.0). There are many improvements that we can make to make Droiid more responsive and aware of its surroundings. As well as creating new events e.g IRL Immersive Robot Circuit Challenges – where you can control the Robot.

These improvements would be considered for v2.

All parts, schematics, and 3D printed files for Mini Droiid can be found here.

If you would like to control droiid via Livestream, Join the stream on Twitch or YouTube. Ask questions, contribute, and enjoy the show.

Lastly, If you would like to support this project, consider supporting my Patreon page.