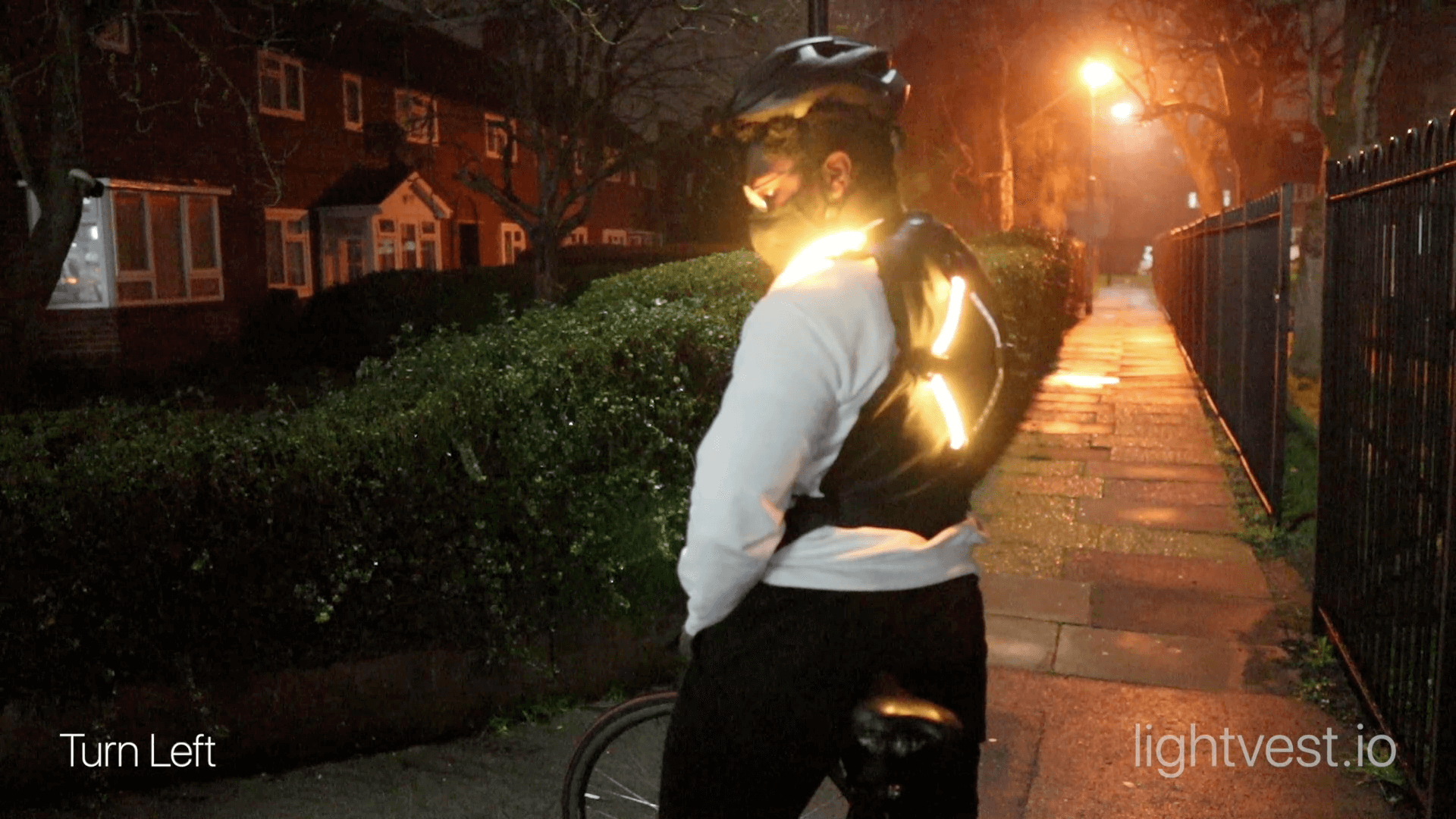 4 Weeks. I had 4 Weeks to Build a Start-Up from scratch.
This included:

But now those four weeks are up, and I would like to introduce LightVest.

LightVest is an open-source Bike Safety Vest designed to be a wearable technology. The product is a Bike Suit designed to increase a cyclist’s visibility, especially during the night. As well as improving cyclist’s communication with other motorists and pedestrians.

Since it’s open-source using Bluetooth technology, you can even track your journey through your phone – or use this data for more insights.

This Article would detail how the process of building a Start-Up (LightVest), and some takeaways from a business perspective.
Or alternatively, visit how Lightvest Bike Suit was built / Tutorial

It’s important to lay some ground rules, so here they are:

So doing the maths our new business hours is 7 – till late.

Building a Start-Up is an interesting thing. But what exactly is a Start-Up:

“A start-up is a young company founded by one or more entrepreneurs to develop a unique product or service and bring it to market. By its nature, the typical start-up tends to be a shoestring operation, with initial funding from the founders or their friends and families.” – Investopedia

Equipped with $500, and at the early peak of the Dunning Kruger Graph. This is my attempt at launching a Start-Up. Let’s start this.

Finding a Product – The Idea:

When it comes to generating ideas, there isn’t any rule to creativity. The process I’m going to follow is a mixture of generating ideas through a brainstorming session of problems and checking the demand on that key term based on its analytics.

Now that I have the Wearable LED suit idea, the Target Audience is essential as they’re the customers we’re providing a solution for this issue.

An LED Suit can fall under a lot of categories, but after a bit more research into existing LED wearables, the Bike Industry was the one that stood out.

Creating the MVP – How it Works:

Now to prove that creating an LED wearables is something possible. I would need to create an MVP—a Minimum viable product.

“A minimum viable product (MVP) is a version of a product with just enough features to be usable by early customers who can then provide feedback for future product development.” – Wiki

To scale this Start-Up Idea, building a team of experts is going to essential. Given that this product is wearable technology/clothing and would need some help with Fashion.

One thing about the existing competitors is their design. I believe for this to be more of a practical solution; it needs to be fashionable. And this is where I call an old-time friend.

A few sketches of the original design concepts were drawn, with the above points in mind. Finally settling with a more straightforward and ‘less flashy‘ design. The LightVest consists of:

The below table explains what each LED part does

If you want more details, here’s the full tutorial on creating a wearable LED Bike suit for more details on building your own.

So a summary: We’ve now identified our Idea, Target audience and have implemented a solution to address cycling during the night. We’ve now created an MVP and implemented our very first prototype.

Since the LED Bike remote is in its alpha test stages, there is still room for improvements. The next following steps are to design a PCB to shrink the size of the components. After all, we still have a  breadboard within the remote!

Creating a PCB helps reduce the development board’s footprint and keeps everything in place. As the Breadboard is more for prototyping and would not be as practical in the real world. You can find the schematics in the download section.

A PCB was designed for both the LED Bike Suit and the LightVest remote. “Since it would take around 7 days for the PCB to be delivered, we’ll put this in the background and just hope it works the first time round!” – Famous Last words

The advantages of a software-based start-up are that resource-related issues are limited to the amount your server can handle, and theoretically, a user can purchase a software game without much assembly and shipping investment into each purchase. However, since this product is a hardware-related project, we would need to design the parts, source materials, and assemble them physically (somehow). This is where a scalability issue comes into the picture.

Scalability – whether it be in a financial context or within a context of business strategy, describes a company’s ability to grow without being hampered by its structure or available resources when faced with increased production

There are two main options.

However, both the former leads to a scalability issue, while the latter would put LightVest deplete all of LightVest funds. We’ll need to address this issue.

Marketing was the most interesting part of this. As of now, we’ll need to officially put a brand name to it. (And yes I know), I actually put some time into creating an Ad campaign, making a Website, and even preparing to sell it like an actual product.
Now thinking of a name can be fun and quite challenging at the same time as ideally, you want a word to represent your brand. Or the solution you’re providing.

With that done, a whole site was created: visit lightvest.io

The breakdown of parts is based on the retail price and not on the wholesale.
Note: The price can be driven down significantly with dedicated electronic parts and wholesale prices.

This is a ball part estimate and doesn’t include labor hours.

The cost to build this product is about ~$49.99. However, this is just the cost alone for standard DIY Components. And the price could be theoretically be driven down by purchasing items on wholesale and using more efficient parts, e.g, ATTiny Microcontroller. Rather than using an Arduino, which costs $5 – $20. As a result, we could drop the price down significantly.

But at the end of the day, scalability is still the biggest issue.

How can you make this scalable?

Things are starting to take on an upward trajectory. We got the MVP, we’re waiting on making a PCB version. We still got $200 to spend. However, the scalability issue is still a major problem to address.
With manufacturing cost exceeding the $500 budget, pivoting seems like a good option.

Pivoting – A start-up pivot occurs when a company shifts its business strategy to accommodate changes in its industry, customer preferences, or any other factor that impacts its bottom line. It’s essentially the process of a start-up translating direct or indirect feedback into a change in its business model.

Ikea’s business model works on providing the customers with the whole unassembled package, which means they could have lower prices as they don’t spend much on the assembly process. An unassembled box works in the long run as you can pack more volume per shipping.

And that’s it, we’ve pretty much launched!
LightVest is open source and free, designed to be improved and developed on. So After four weeks from The Idea to Launch, here we are.

You may be wondering did you make money at Launch. So it’s been three days; it’s hard to tell, but this concludes the Launch of the LightVest product as part of the 4-week start-up.