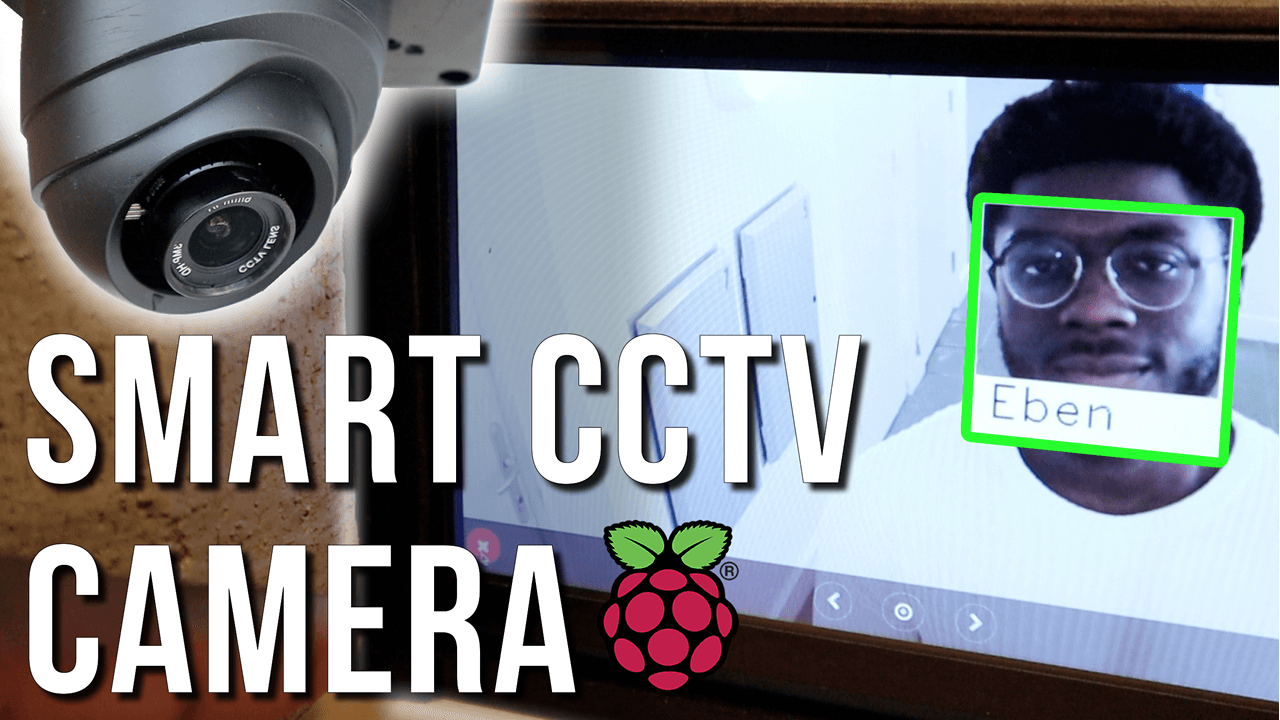 Imagine the endless possibilities if we could make our standard CCTV Camera smarter and interactive.
Well, introducing the Smart CCTV Camera. A Raspberry Pi IoT powered Smart CCTV camera featuring face recognition, home automation, and the ability to interact with your camera’s live stream. In essence, it’s more like a DIY Ring Camera.

The smart CCTV Camera keeps tabs on your valuable assets as well as informing you of its surroundings, whether you’re indoors or outdoors.

Whether you place the SmartCCTV indoors or on your front porch this works as your intelligent watchdog camera.

The following article details how to build your own Smart CCTV camera using a Raspberry Pi with the new High-Quality Pi Camera – as well as its dedicated monitor. Let’s get started!

Costs: The total project cost ~$180 dollars, however with a bit of research you can bring this price down. You could also make a cost-effective version using the standard Pi Camera module V2. View the video on the comparison of the two Pi Camera modules.

The smart CCTV work by capturing live footage from the camera build and using Flask to create the live stream for our client devices to view the stream. Flask is a lightweight micro web framework which is a great bridge between Python and HTML Web pages. This makes it ideal for touch screen interaction.

Devices connected to the same network of the Pi (CCTV Camera) would be able to visit the URL and see the live footage of the stream. OpenCV would be used to access our video stream. Finally, we would use a face recognition library to identify users.

The assembly of parts is broken into two sections:

The camera build consists of a Raspberry Pi 4, micro SD card, Pi High-Quality Camera, and a Plastic Dome Camera Enclosure. The Raspberry Pi is powered by a USB-C Power Supply. In essence, this is all you need to complete the build is a Pi and Pi Camera module.

Similar to the Raspberry Pi V2 Camera module the High Quality Pi Camera module ribbon cable is inserted into the Camera Port of the Pi.

The CCTV camera enclosure was made by stripping out a cheap plastic dome CCTV camera and using the plastic camera Chassis as the enclosure. Finding a CCTV enclosure is optional, however, this does help with the aesthetics. The original color of the camera came in white, the camera and enclosure were then spray painted to a matte black finish – which helped give it a stealthy look.

This is where a servo motor comes into the picture. Servo Motors are really great for precision. The MG90S servo motor allows for a full 180-degree rotation which is ideal for a camera mounted to a wall.

To mount the servo motor we would strip the wires and solder female header pins to plug into the GPIO pin of the raspberry Pi header.

A hole can be drilled into the Camera Chassis to screw the motor in – enabling the camera to rotate when the servo rotates. Once completed, re-assemble your Smart CCTV back together.

Note: A camera enclosure was used to house the Raspberry Pi. Keep in mind to build an enclosure that has some form of ventilation to prevent the Pi from getting warm overtime.

The Smart CCTV camera live stream can be accessed from any smartphone via Web URL. However, for the times we want to view the live stream at that immediate instant without pulling out our phones every time, a dedicated touchscreen display monitor would be practical. This Interactive display monitor indefinitely shows the live stream, as well as you can interact with the camera moving left and right.

The Dedicated touchscreen monitor frame was assembled using 1×4 MDF Fiberboard wood which can be found at your local DIY store. Using a hacksaw, the wood was used to cut to the exact dimensions of 13 H cm x 22.5 W cm x 4.5 D cm. The frame was then assembled and was held together with PVA glue and nails. In addition, a glossy Black finish was applied, giving a modern aesthetic look that can blend on your bookshelf.

Great! We’re on the Software part. Now the next part is installing face recognition and the dlib library.

Having flashed the latest Raspbian OS onto your Micro SD, and completed the setup of Pi. The next part involves installing the face recognition & dib library to the camera build Raspbian OS.

Note: This was installed on the Raspbian OS release May 2020.

After logging in via VNC and completing the Pi OS Setup Wizard. We’re going to enable the Pi Camera Port ports.

Open the terminal window and run:

Select Interface Options, Camera Port and select Enabled. You can now exit. This may cause your Pi to reboot.

You can make sure that the camera module is all working well by taking a picture via the Pi camera module by running this in the below terminal command:

This would save a picture of what your camera is viewing to the desktop as image.jpg. You can view the image.

Note: If you’re using the Pi HQ camera you may need to adjust your lens if the picture is too blurry.

Note: The process took about ~40 minutes on the Raspberry Pi 4 (4 GB), but can take several hours on other Pi models. If unsure of the installation, you can also refer to the video tutorial.

Once the dlib library and face recognition is installed you can now clone the Smart CCTV Git Repo. This repository contains Flask to establish live streams from Pi to other devices connected to the network.

To access the live stream with face recognition run main.py. You can start your live stream by visiting the IP address of your Pi on a browser connected to the same network. The address can be found by entering ifconfig in the terminal of the Pi.

Via the Livestream, you can now interact with your camera by rotating the camera to cover your blinds spots. Moreover, you can add additional functionalities such as light control. (That’s a whole other topic).

How to add a profile to the face recognition:

How the Face Recognition Library works

If you have any questions, leave a comment below or watch the full tutorial video.

There you have it, your own SmartCCTV camera. If you like this project, feel free to leave comments /contribute and develop the SmartCCTV repo. You can now program the camera to theoretically perform any action based on an intent (being face recognition). Think of IR LEDs, night vision smart locks… the possibilities are endless!

If you would like to support this project, consider supporting my Patreon page.